Men as volunteers in Drop in the Ocean – more men should volunteer. 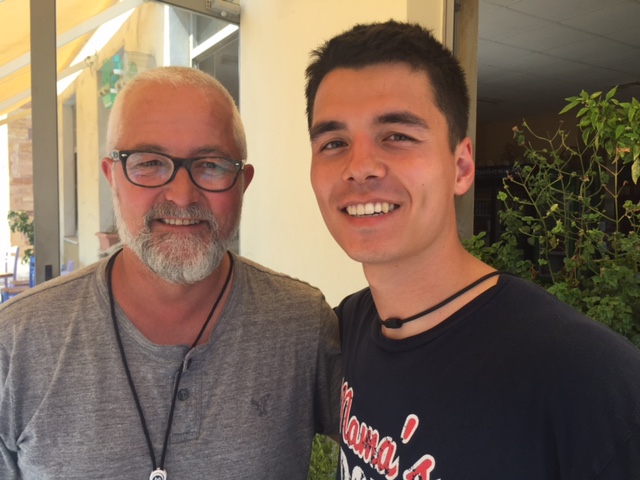 Around two thousand volunteers have travelled with the Drop in the Ocean since the beginning of the refugee crisis. The majority of the volunteers are women. However, there is no restriction for men to be a volunteer.

Meet two of them; Haye Sahelijo and Morten Lange, two men with very different background. Haye is 24 years old from Chicago who just finished his studies in documentary film and producing. Morten, 52 years old from Stavanger has a career within banking.

Despite their differences in age and profession, they have a lot of things in common. They are curious, engaged in social and political life, lots of empathy and a very strong will to act and to influence.

They both worked in a refugee camp in Chios in September. As always, being a volunteer for the Drop in the Ocean, you just have to jump into it. This is a strategy from the coordinators in order to make the volunteers operational from day one. No time or need to hesitate and undergo long training, the volunteers are meeting the refugees face to face. The task is often demanding. The working hours long and irregular.

So how was it?

-Just great, says Morten Lange. Of course you get tired, some days you are really exhausted. But compared to the life of the refugees, our life is easy. We are here for a shorter period. Some of the refugees have been her for more than six months. In addition to fleeing from war many months as well. To get the possibility to contribute is a gift. It also gives an amount of corrections and adaptions to my own life. It is so easy to forget how nice our life in Norway is, easy to get influenced by richness and our chase for material happiness. I therefore consider this experience having a double purpose; corrections of my own life and the huge pleasure of helping others.

Haye has another approach to the experience. He was simply travelling in Europe after his studies and wondered what to do. Some friends in Italy recommended him to go to Chios and work as a volunteer. The advice came from an earlier “drop”.

It feels so good to be useful and caring

– It’s exhausting, emotionally and physically. The language barrier is also a challenge. But after one week only, I know that I did the best choice. It gives so much! It feels so good to be useful and caring.

He is planning to make a documentary film about Chios and the refugees.

But our main question is: Why are women dominating the volunteering “business”?

-Simply spoken, probably because women are more emphatic of nature than men. It’s easier for them to make a choice like this. –

-Getting back to work again, I noticed that my male colleagues did not car so much about where I had been. They just knew I had worked as a volunteer. On the contrary, the women wanted the details, all the details.

– Anyway, we made a choice to participate. One of our goals must be to transmit our experience and talk about it to other men and emphasize the mutual satisfaction you get by helping. Convince them that also men can be “drops in the ocean”

Your ticket for the: Men as volunteers in Drop in the Ocean – more men should volunteer.

Men as volunteers in Drop in the Ocean – more men should volunteer.