Distributing with dignity in mind 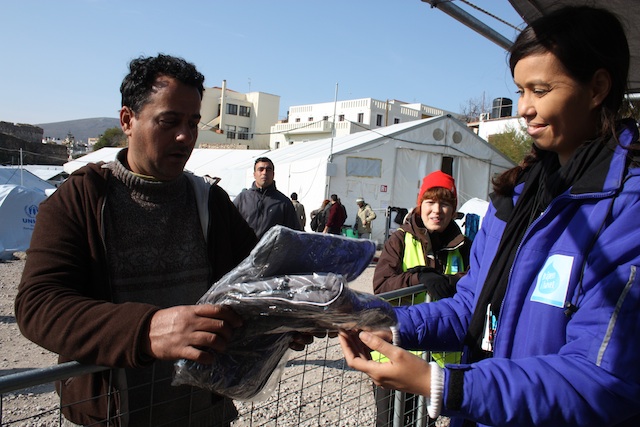 After several cold and windy days, our distribution of men’s and women’s clothing this week in Souda camp took place in pleasant sunshine. The activity, during which underwear, scarves and jerseys for around 120 women and sweatpants for several hundred men were handed out, went on for two days.

“I don’t have money to buy clothes,” said one young mother from Syria. “I wanted new underwear and have found what I need, but I would also like to have some clothes for my children.”

It was a sentiment echoed by many of the ladies in the queue.

Bringing the ready sorted items from the warehouse to the camp.           Preparing for distribution.

A Syrian university professor standing on the sidelines with her husband and two children also shared her thoughts  “It would be lovely if you could organise a kind of market, where we could come and choose what we want, and pick the colours we like,” she suggested.  “But I know that is not easy, and I am happy with the clothes I got today.”

When asked if there were other items that women in the camp would like to receive, she answered: “You may not think this is important, but for us it would mean a lot if we could have some makeup.” She spoke with great dignity.

Caring for people’s psychological wellbeing as well as their physical needs, should be the touchstone of all humanitarian aid. And even though makeup might not seem a priority compared to having a set of new clothes, it nevertheless would restore a small measure of normality to the lives of women exposed to uncomfortable and often very stressful conditions in the camp. And who wait, sometimes for months, for their asylum requests to be processed.

On the second day of the distribution, several hundred men, both young and old, lined up impatiently for sweatpants and hand warmers. There was much bargaining, and not a few raised voices, the men proving to be just as choosy as the women when it came to the size and colour and design of their trousers.

These are not original, but we like them anyway!

“With limited funds, we have to make difficult decisions between buying cheaper items and getting the quantity we need, or more expensive ones that will last people longer, but may mean that we don’t have enough to go round,” explained Jeppe Mariager-Lam a long-term volunteer who helped organise the distribution.

“It applies universally to how aid is managed,” he went on gesturing towards the camp in which different agencies work. “It applies to the tents, the tarpaulins, the showers and toilets, the solar panels for heating water…. It’s a quality versus quantity dilemma that affects all of us.”

Would you like to support our work in the refugee camps in Greece? Look how you can do it here!

Distributions in a camp as big as Souda, which currently houses some 800 asylum seekers many of them from Syria, Iraq, Iran and Afghanistan, need days of preparation.

When it comes to clothes, for example, cultural sensititives must be kept in mind, especially for women who require long sleeved, loosefitting tops or dresses that ideally reach to the knees.

Each distribution also has to be coordinated with the other aid agencies, and with the local authorities, who are responsible for Souda.

“We are constantly juggling priorities and trying to find compromises,” says Sarah Unsworth, the warehouse manager. “But it is always satisfying when we can give people a dignified choice as to what they need.”

The women could choose new jumpers, scarfs and underwear.

The distributions this week went well, and involved all the volunteers.

“I was watching a young Afghan girl choosing a scarf for herself and a grey wollen top,” remarked Trude Maehlum from Norway during a coffee break. “I’ve often seen her in the camp, smiling and playing with her younger siblings. It was not just her face that looked happy today. I could see a smile in her eyes as well.”

Your ticket for the: Distributing with dignity in mind

Distributing with dignity in mind