From stage to reality – an interview with Portuguese actress Sofia Lobo. 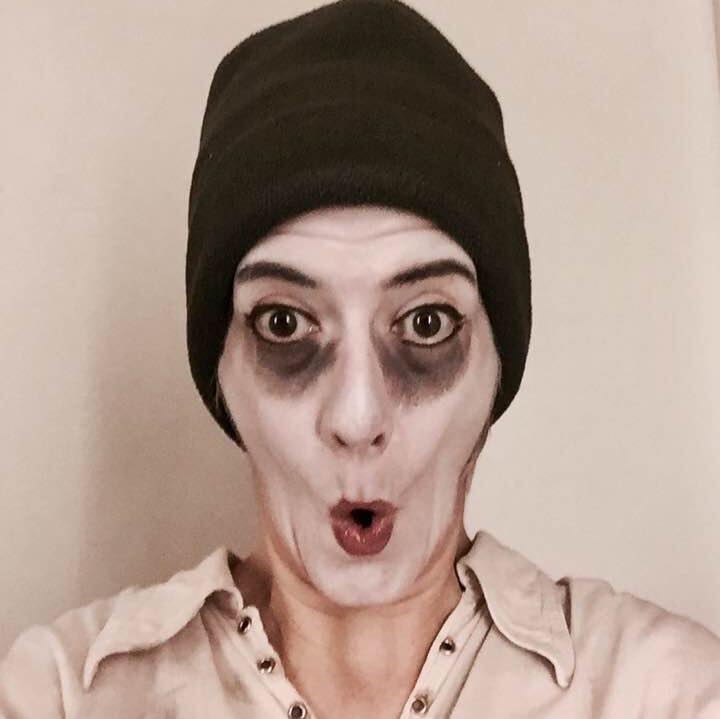 Sofia is a professional actress, who works for Escola de Noite (The school of the night) in Coimbra, central Portugal. The Theatre celebrates 25 years this year and they have set up 65 productions in total. Sofia has performed in almost 50 of them, and has also worked as a director for three plays. Right now they are playing “Historias Perversas”, a collection of stories from the Spanish author Javier Tomeo. Sofia does 18 different characters in this play! Some weeks ago she returned back home, after her third time volunteering for A Drop in the Ocean in Greece.

“The things we were seeing in TV really affected me” she says. “When we began to see all those boats coming and all those children crying I thought: what Europe is doing to these people is awful. They are treated more like animals than as human beings.”

“It is hard and it is getting harder. There is uncertainty. No one knows what is going to happen. There are people arriving almost every day.  There are people, children, sleeping under the threes. There is not enough food, and people are coming from other camps to get the leftovers. There is not enough, and that is something that is extremely hard to see.” As an actress she is used to deliver emotions, feelings and entertainment from the stage. As a humanitarian worker she meets the hard reality in the camps.

“It´s difficult, the lack of power that we have, although we do our best, what we can.”

“Even in theatre one of my biggest concern was people that were suddenly left with nothing. The stories about people that have to live almost without resources, with just the essence of the human being. I am not a person to be in the front line. I am not good at arguing or intervening politically, but I thought I might be able to help in another way. I had to go there, somewhere, anywhere, and see how I could use my free time to help someone who needed it. It was the first time I did something like that. The first time I travelled all by myself. I began looking for organisations and I decided to try A Drop in the Ocean. I was lucky, everything went well from the first moment.”

“When I am there, in the camps, working with those people, trying to give them some comfort it is much bigger than anything I do here. The importance of giving a cup of tea for instance. For those people that have been through horrible things, things I cannot even imagine. I try to convey my experience. I have done some interviews and written a play for young people. I have used Facebook both to show what I have been doing and to release my own emotion. It helps me, but also helps other people understand what is going on.”

“In Chios, where I recently was working for three weeks, there are two camps at the moment. Souda Camp and Vial. In Souda Camp, which is about to close down, the people live in tents. There are rats crawling around at night time. It is extremely hot in the summer, and very cold in the winter. The other camp is ruled by the army. The residents live in containers, but the conditions may even be worse. I´m still emotional about my experience. Apart from the work we did in Souda camp, A Drop in the Ocean also opened a Drop Boutique, where the residents of the camp could buy, with the virtual currency “Drops”, some new clothes.”

“I have also been in Skaramangas twice before this last time. In the summer I played with the children and helped to organise events such as “Skaramangas got talent” and the “Olympic games of Skaramangas”. In the winter we distributed shoes to almost all the residents in the camp. Almost 2000 pairs! This third time I was one week in Athens. I went to Skaramangas and I visited the Drop-In centre and saw how people that have already been accepted for relocated get help to get in touch with the culture and the language of the country they are moving to, in this case it was Sweden.”

“We are not supposed to get too attached to people, but it is impossible, they need emotions and attachment almost as much as they need food. To me, and to them, it was important that I went back to Skaramangas camp, because I was truly worried about them.”

Do you want to know more about how you can volunteer with us? Click here to find out what it takes.

“Volunteering with A Drop in the Ocean changed my life, it changed the way I look at people and situations. I give value to the things I have. And I don´t give value to things that do not matter. Each time I come back I only think about when and how I can return.”

Your contribution can make a difference to the people living in the refugee camps in Greece. Read more about ways to contribute here.

Your ticket for the: From stage to reality – an interview with Portuguese actress Sofia Lobo.

From stage to reality – an interview with Portuguese actress Sofia Lobo.