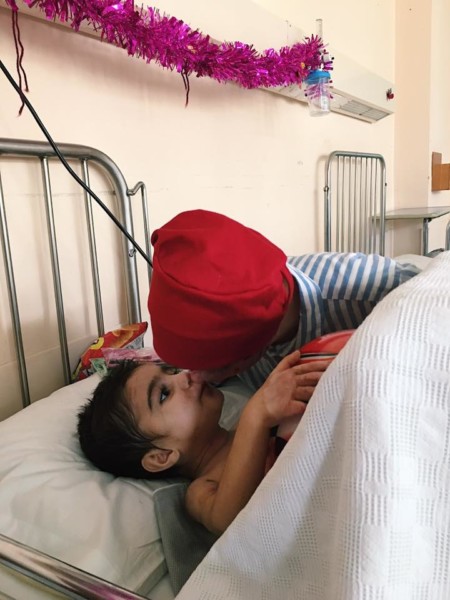 After more than three months apart staying at different hospitals in Athens, Bayan and her 2 year old son, “heartbreaker” Bahez are finally reunited.

It was on the 24th of November last year that the tragic accident occurred in the refugee camp Moria on Lesvos. The camp, which is partly funded by Norwegian aid funds is considered to be one of the worst refugee camps in Greece. It was late during the evening when a gas canister exploded in the tent where Bayan lived together with her husband Nabaz and two sons aged 2 and soon to be 6.

Bayan, who was in the tent together with her little ones manages to get them outside, but the injuries that they incurred were very severe. Her oldest son, Barez, and an elderly lady who was in the tent at the time, did not make it. Bayan and the youngest boy, Bahez, were flown to a hospital in Athens with fatal injuries. The injuries were so severe and for a long time it was uncertain whether or not they would make it. For several weeks Bayan had to use a respirator and they have both undergone countless operations and skin transplants.

Bayans progress has been overwhelming, and yesterday she was discharged from hospital. Even though little Bahez has repeatedly been shown several video clips and photos of his mother, everyone was very excited how he would handle the reunion. Would he recognise her? Would the memories from the dramatic evening be too strong? The moment when mother and son finally could meet eachother was described as magical. Not one eye was dry. Despite all the hardship they have endured this was a day of happiness. A day to get new strength and hope.

Bayan’s husband Nabaz, has been through his life’s worst nightmare since the fateful evening in November. He had to take care of his wife and his youngest son who were at two different hospitals in Athens. At the same time he had to handle the most difficult thing a father can go through, to mourn that little Barez, who would have had his sixth birthday a week after the accident, was sent to his hometown in Iraq to be buried. The sorrow and pain he has felt this period is almost more than what one person can handle. Luckily the Norwegian volunteer, Thea Andersen, who knew the family from before, has been an amazing support and been there for them day and night so that Nabaz could travel between the two hospitals and be there for his loved ones.

A Drop in the Ocean has assisted the family in every possible way, both by putting them in contact with legal aid and Greek and Sorani interpreters. We have tried on several occasions to try to help the family get a chance in a different country, a country where opportunities for work are greater than in Greece. It is a complicated process but we are not giving up! The donations that we have received for the family are used for medical follow up and other needs the family will require in the time to come.

Your ticket for the: Mother and son, finally reunited!