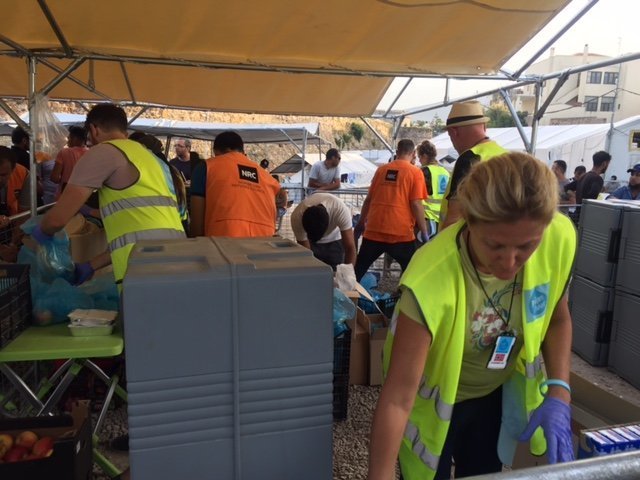 The gentleman in his forties on crutches comes up to me. He is telling me that it`s his last night in the camp, as he is moving on to Athens. I notice something that looks like tears in the corner of his eyes. He thanks us for everything the Drops do for the people in Souda camp.

He thanks us for the bag he received to put his few belongings when he leaves. He thanks us for all the wonderful volunteers who share their smiles and friendly words and have time to listen.

I ask him what happened to his legs? “Prison, Syria. Four and a half years”. No more words are needed. He shows me how they tortured him by pulling out his teeth. He pulls up the sleeves of his shirt. The scars from torture is everywhere. Now the tears are in the corners of my eyes. The gentleman takes his portion of food and walks with his crutches back to his “home” on the beach, a small tent he shares with several other people.

I walk on and I notice a beautiful little girl, about 8 or 9 years. She has Down`s syndrome and I try to figure out if they are playing, or if the two younger boys are bullying her. They way of playing between the kids in the camps often look much more brutal than what I am used to from my own kids. It seems to be an acceptance for slapping and kicking other kids. Sometimes rocks are picked up and the volunteers will talk nice and calm and make them put them down again.

Raising children under these conditions must be extremely difficult, and there are so many children here now. Last time I visited the camp, three months ago, it hosted approximately 500 people in total. Mostly men. Less than 20 persons were under the age of 15. Now there are toddlers and babies everywhere!

Two young boys are trying to maneuver their wheelchairs across the rocky ground. One of them, about ten or twelve years old is looking with a distant look out to the sea, to Turkey. To his past. The past is the only thing he knows anything about, and when seeing his legs it`s obvious that his past is filled with pain. He is probably not old enough to remember the time before the war. But now he is old enough to understand that his future is not at all as bright as he could be hoping for. Still, anything is better than going back there, to the lights on the other side of the sea.

“Shoes! Do you have shoes?” There are not many weeks since we bought shoes locally for 6.000 euros, and a couple of months earlier for another 10.000 euros, to cover all the residents in the camp. With the new arrivals in May, the highest number since April 2016, there is still a huge need for more shoes. And it is not just to buy and give out to anyone who asks. If distribution is not done in a fair way, it just causes more trouble and internal fights. With tents everywhere, there is no space for setting up a distribution.

The volunteers from A Drop in the Ocean, together with our partner NRC, distribute food to everyone in the camp and even to people from the other camp and from the streets. 1300 meals x 3 times every day of the week! Even though the volunteers change every now and then, the team work together with an incredible efficiency. It is impressive to watch and it looks as if they have never done anything else. Now, during Ramadan, dinner and breakfast is handed out together in the evening. One line for the men, one for the women and one priority line for the people with special needs. To be in the priority line you must show a paper from the doctor. As soon as the residents of the camp is served, the tension rises. That`s when the leftover will be handed out, and the first ones in line will get it.

As I observe the group of international volunteers working hard to make food distribution smooth and positive, this young man, 17 years old comes up to me. I remember him well from September last year. He was then a boy – now he has become a man. He looks ok and in a good mood to me, but later I hear that he is very depressed and our staff worries about him. Many of the young boys have scars from cuts on their arms and wrists.

A young woman faints next to the food line. She is the mother of two small children. The fasting through the day make many people particularly vulnerable. We have a doctor in our team this evening, and occasionally he must leave his post where he is packing the food, so he can assist on cases like this.

When I leave the island, I leave a camp behind which is worse and with more tension than ever. It is completely full and has grown far out of the designated area. And still, no new residents have moved into Souda camp since May 24th.

Leaving Greece is so easy for me physically, but so tough emotionally. It always reminds me of the way we human beings are divided into different levels, depending on where we were born. I was the lucky one.

Some very good things came out of this visit though. We have increased our coordinator team with one extra person, so they now count three highly dedicated coordinators. I am confident that they will do their outmost to support the volunteers and to make the everyday life for the residents in the camp as good as possible.

We have also found an amazing place to start our new project, the distribution centre “Drop Shop”. The next few months will for sure bring many changes and challenges to Chios as many big organisations will leave. Still, some fruitful meetings with existing and new collaborating partners give me hope that together we can continue to make good things happen!

Your ticket for the: Tents and tension