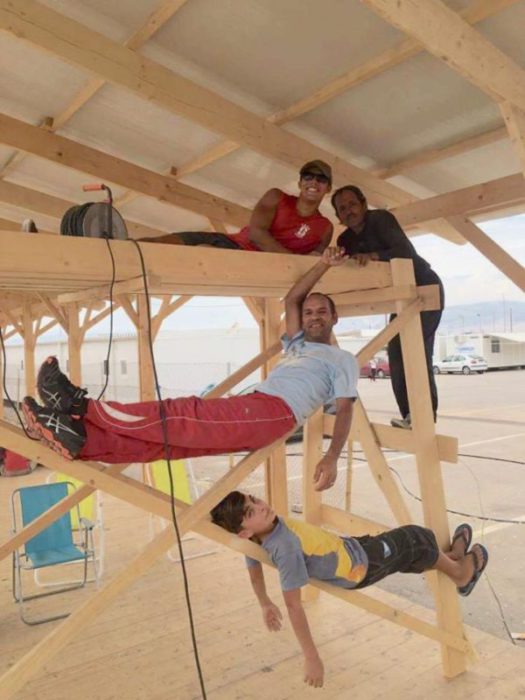 Nicolas Lozano-Landinez, volunteer for Drop in the Ocean, shares his experiences as volunteer in Skaramangas refugee camp in Greece. From July to September, he volunteered at the Skaramangas Refugee Camp. This is a state-sanctioned camp 30 minutes west of Athens that provides shelter for refugees from Syria, Iraq, Afghanistan, Kurdistan, and Pakistan.

Joy and despair in everyday life

-In conjunction with Organization Earth, the Danish Refugee Council (DRC), and other NGOs (16 total), I supported the construction of the Community Center, a Drop in the Ocean project. This will be a space that will become the social center of the camp. It will have a café, two multipurpose rooms, a library with free computer and Wi-Fi access, and outdoor seating/shading. This experience has proved to be an invaluable opportunity for many reasons.

-First of all the opportunity to work with people of various cultures, ages, and ethnicities gave me insight into specific characteristics, both positive and negative, that unite all humans, regardless of these identifying factors.

-The willingness of refugees to relentlessly help with the construction of the community center, showed me the human desire for a sense of purpose and progress.

“I witnessed the ability of marginalized people to see beyond nationality, religion, culture and understand what true humanity really meant”.

-Attempted break-ins of our containers and other NGO offices showed me what boredom, desperation, and the fear of the unknown could do to children and adults alike. People who scavenged not out of greed, but rather out of distress and forced individualism.

-The simple joy and gratitude that people displayed when a stool or table was fixed at our construction site was masked by the fact that sitting on that stool or table were the only activities waiting to be done every day.

-The pure happiness of a small child due to a new game, activity or song showed us the perseverance for life that the young have. While the scars on many adolescents’ arms taught us that this unshakable optimism often diminishes as we grow older and better understand the things that we have seen.

-Above all, I witnessed the ability of marginalized people to see beyond nationality, religion, and culture and understand what true humanity really meant.

-During my time at the Skaramangas camp I had the opportunity to connect with individual refugees. I heard about their culture and religion and established friendships that brought love and happiness to the campsite and its people. While we had volunteers from many nationalities within the camp, our most constant volunteers have been primarily Afghani. Because of this I began to learn Farsi, the main dialect in Afghanistan.

-I was so grateful to them that I wanted to show how much their help and hospitality meant to me. The fact that we could do so much shows how similar people are. It showed that language and cultural “barriers” are often just a lack of effort to understand another group of people.

–During my time at Skaramangas I have had some of the worst and best days of my life.

-Seeing the camp come alive at night at around 8:00pm as the sun went down and the weather grew cooler was a unique experience.

People sharing the little they had

-Thousands of children playing games as adults set up barber shops and mini-restaurants. Sharing what little they had with each other, was one of the most beautiful experiences of my life.

-Understanding, however, that the current refugee relocation system in the E.U. vastly undermines the necessities of these Syrian, Iraqi, Afghani, Kurdish, and Pakistani refugees. Meeting the people who deserve the best that this world can give, filled me with a sense of desperation that I had never experienced before.

-I leave Greece struggling with the uncertain fate of these people and the sincere hope that our work at the camp will bring them happiness until they are able to move on to a better destination.

Pictures from building of the community center in Skaramangas refugee camp

Your ticket for the: Volunteer Nicolas Lozano-Landinez reports from Skaramangas Refugee Camp