We are counting down for the Holidays – Here is Nura, a strong mother of five from Aleppo 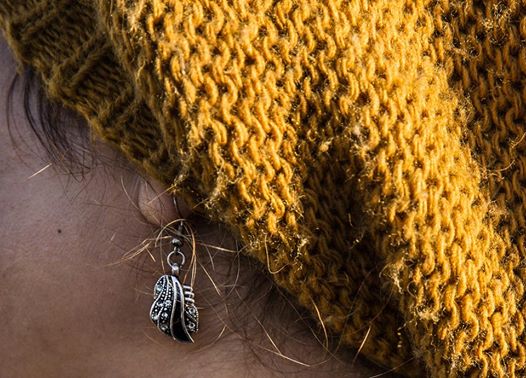 In order to give people outside Chios the possibility to understand how it is to be in a refugee camp on the island, A Drop in the Ocean will present an alternative Christmas calendar this year. Each day until Christmas, we will post 24 amazing stories about the people we are so blessed to spend our everyday with.

Nura often comes and kisses me on my cheeks with her pink lipstick when she is standing the queue for lunch or dinner. Warm kisses, from a warm woman. Three kisses: right cheek. left cheek. right cheek. But also a tough woman, who was abandoned by her family the day she decided to leave her husband after he hit her.

That happened in Halab back in 2005. “Halab?” I ask, “Where is that?”. ”Halab is Aleppo in Arabic,” our friend, the translator, says, when he joins us at the table in the fish restaurant close to the Souda Refugee Camp. The same place he sat down with the volunteer Sara for an interview, the day before. He is Meyar Naser, 18 years old, also from Syria, like Nura, and always eager to help when he is needed. Outside the restaurant there is some drama going on, and Meyar would like to translate both for Nura and for the distressed person sitting outside.

”The relatives will come and kill this person”, he says, hurrying back to his chair, ”They have found out from Turkey that they are here in the camp, they have even discovered their tent number in Souda. They say: Soon we will be in Chios, and then you will suffer for having brought shame on your family.”

Nura has a similar story. Accused of bringing shame on her family for divorcing an abusive husband, she has had to support her five children the last ten years all by herself. Even today, her family, many of them living in England, don’t want to help her by sending photocopies of their passports to speed up her asylum application process.

She has sparkling brown eyes and her face is heart-shaped, but it’s clear she is also a woman who knows how to get by in a tough world, and I say to her: ”You are an emra’a jameela,” in my bad Arabic, but she shakes her head and says: ”No, I am not a beautiful woman. Look at my skin: too much work in the fields and market places.”

In Aleppo it was Daesh and the war that broke out. Nura hardly remembers anymore when she left her hometown. For the last four years she has been a refugee fleeing war in Turkey without ever being given the chance to claim asylum. Her main concern is her five children, ”my babies”, she calls them. Two are over 18 and the others are teenagers. She shows me their photos and I recognise one of them. A few days ago he was in the queue for dinner, his right arm in a bandage, and he was laughing all the time.

”Yes”, Nura, says, ”and do you remember the day we met you in the street?”. I nod my head: I remember. The boy, around 17, still had his arm in a bandage, and he also showed me the bruises on his head and one foot. ”Police,” Nura had said. ”The police hit him”.

And with Meyar’s help I now find out that her son also has psychological problems. Nura explains the cause to us: In Aleppo he suffered brutal treatment from Daesh, and one day he came home with blood all over his body. In Turkey he was arrested and beaten by the police, alongside the other men with whom he had tried to get on a boat to cross over to Chios. And again in Vial, the military-controlled refugee camp in Chios, he has also been beaten. ”Because he laughs,” Nura says. ”He laughs at the police, and does strange grimaces with his face, and he beats his heads against walls. Then the police get irritated and hit him.”

There has been a lot of beating in Nura’s story. She points at her nose – ”This was broken by my husband”, and she adds, ”and by my brother”. Then when she arrived in Turkey she began to fear for her daughters’ safety.

Life in Turkey was incredibly hard; moving from one city to another, the family always treated like second-class citizens, or worse like illegal aliens, or even ”animals”. Nura could never get any assistance from the police. Not when her money was stolen out in the carrot fields, where she worked for a long time – 14 hours a day, earning just 25 Turkish Lire (7 Euros) a day. And not when her daughter was hit by her boss in the coffee shop in Ankara, where she was working.

In Ankara, Nura managed to find a fairly good job as a dishwasher in a restaurant. She was learning Turkish and had started to save money for the mahrab. ”The mahareb?” I ask. ”No, no!” says Meyar, the translator. ”Mohareb means soldier, like askari. Mahrab means smuggler. You know, the man who arranges the journey to Europe.”

Since Nura had gone to the police when her daughter came home from work beaten, she was also fired from the restaurant where she worked. ”You know”, she says, ”the restaurant owner knew the coffee shop owner, they are like a mafia. And when my daughter didn’t go along with what the boss wanted, including sexual advances, they came to the place where we lived and threatened us. So we left Ankara. We left everything except my savings and we travelled to Izmir.

In Izmir she found a mahrab. She paid him nearly all her savings (she had only 500 Euros left) and got a place on a boat to Chios.

”Was it that easy to find a smuggler?” I ask. ”Oh, yes”, Meyar intervenes enthusiastically: ”It’s like meeting the volunteers here on Chios. Only they are smugglers. You don’t have to find them, they come to you.”

Your ticket for the: We are counting down for the Holidays – Here is Nura, a strong mother of five from Aleppo

We are counting down for the Holidays – Here is Nura, a strong mother of five from Aleppo