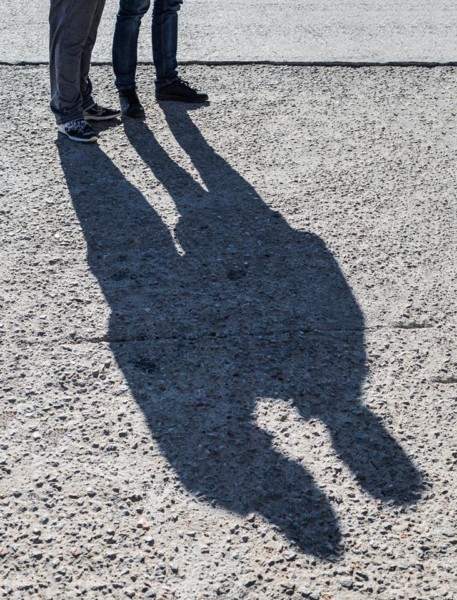 In order to give people outside Chios the possibility to understand how it is to be in a refugee camp on the island, A Drop in the Ocean will present an alternative Christmas calendar this year. Each day until Christmas, we will post the story of 24 amazing people, that we are so blessed to spend our everyday with. The stories are written by our wonderful volunteer Diana Valdecantos and photos will be done by our amazing coordinator and photographer Nickie Mariager-Lam.

Liyas Mickilaf and Lotfi Boumzar are like brothers. When one of them speaks, the other one nods along and if the first one makes a joke, the latter laughs with complicity.  They make a really good team. Born and raised in the same small district in Algiers, they learned to walk and talk together. Their families have always been neighbours and very close, so the 28 and 26 year olds have loved and respected each other for as long as they can remember.
They shared school, games and friends, and had a normal, simple life in Algeria where they both started working to help their families when they turned 17.
Liyas found a job as a mechanic and Lotfi as a painter. The long hours and low salaries are a must in this African country, so these two friends spent their youth trying out new work experiences when they could find them. “In Algeria corruption is the only thing that works perfectly. If you’re lucky enough to have a member of your family working for the government, then you’re safe. If not, forget about it. You won’t find a job, even if you’re more prepared than the rest. I could go to certain job interviews and they would simply destroy my CV or just hire a young woman who had no experience at all”. Liyas explains while mimicking and with a sad grin while Lotfi laughs at his friend’s words.

They both conjure the same descriptions of the land they were born in. A claustrophobic place where there’s no freedom, no future and where police continuously harass them. “You might be sitting down somewhere or just walking, and police officers will come up to you, ask you for identification and check all your pockets in very aggressive way. All the time. Everyday. You can be driving with your sisters and some friends and they will stop the car, and ask for everyone’s id – Even when they can only legally ask for the driver’s license. It is tiring and stressful because you cannot argue with them or ask for explanations – you just have to look down and shut your mouth”.
Confronting police officers can be very dangerous. They both remember the time when one of their neighbours approached a police commander who was celebrating a party in the middle of the night with very loud music. He only asked if they could turn down the volume and the answer was hideous. They kept him three months inside a cave in the mountains all by himself. When he came out his hair, beard and nails were very long and, of course, he never complained again.
These two are also sport fanatics. Liyas practiced full contact karate and even attended several competitions and Lotfi is an extraordinary football player. Sports kind of saved them because, as they explain, there’s not much a youngster can do in Algeria. “Nothing, there’s nothing to do. No activities, no bars nor facilities where we can at least get together. That is why young people end up taking drugs or doing bad things, because: What else can they do all day long without a job or hobbies? It’s become a dangerous place where, maybe to pass the time, gossip is the antidote for boredom”.
Travel visas are also a very complicated procedure and enormously difficult to achieve. For years they’ve tried to get one, but it’s been impossible. “Only a samurai can get out of Algeria. A superhero”, says Lotfi with his constant smile.
Health services are also catastrophic and extremely expensive. Liyas’s father didn’t feel well and he had a terrible pain in his stomach and kidneys. His odyssey to get a diagnosis included a 250 euros scan after waiting and waiting for days. They found some kidney stones and removing them cost them 2.000 euros in a private clinic. But the pain persisted and, after one more 300 euros scan, they discovered a cancer tumour they had missed the first time. Now they needed 4.500 euros to perform the operation that would save his life.
That is one of the main reasons why Liyas decided to come to Europe. They needed money to pay for his operation, and with no jobs and worse salaries, keeping his father alive is easier if he tries his luck here. Lotfi, on the other hand, also needs some income and, as the only young man of his family, he has the responsibility of providing for them. Europe was always in their mind.
One day, after a football match, these best friends had a fight and didn’t talk for four months. “He never passes the ball. Never, ever”, says Liyas. “That’s because you have no skills at all”, Lotfi answers laughing and nodding.
Anyhow, after sixteen weeks without each other, they met in a shop by chance. He overheard Lotfi asking some things about a trip to Europe and he didn’t hesitate. “I just went to him, shook his hand and made peace. Let’s make that journey, let’s travel together”, Liyas said to him. And so they did.
They paid one hundred euros each for the Visa they should get for free and then 250 euros more to get to Istanbul, but they were asked for more money constantly. A smuggler offered them passage to Greece the day they got to Izmir for 600 euros, or 680 with a life jacket. They couldn’t afford the life vests so they made the journey in a zodiac, terrified by these “travel agents” with huge guns, knives and violent moves. “We were really scared. It was 2am and the weather wasn’t good. The waves moved our zodiac up and down. It was horrible. We travelled with forty other people including families and babies. It took us over an hour and a half to cross the Turkish border where we were eventually rescued by Greek authorities. Just then, we felt saved, happy and free”, Liyas remembers.
This was two weeks ago, and now these two friends now live in Souda Camp were they’ve found some solidarity that keeps their dreams alive, once again, together.

Your ticket for the: We are counting down for the Holidays – Liyas Mickilaf and Lotfi Boumzar