We are counting down for the Holidays – Said from Afghanistan 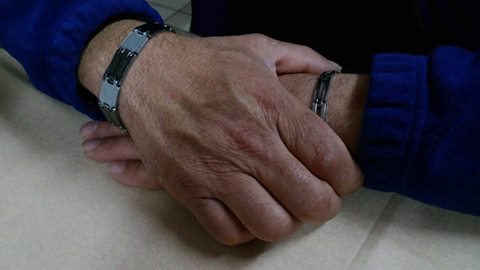 In order to give people outside Chios the possibility to understand how it is to be in a refugee camp on the island, A Drop in the Ocean will present an alternative Christmas calendar this year. Each day until Christmas, we will post 24 amazing stories about the people we are so blessed to spend our everyday with.

Said was a little scary when I first saw him. He pushed his way into the orderly Norwegian Refugee Council’s dinner distribution area in Souda Camp and demanded more food. Angry, swaying, eyes glazed, he stood his ground against a chorus of protest from the impatient queues. One queue for food cards, one for medical priorities, one without food cards, all divided by gender. The wait is long and irritable, refugees huddled against the biting wind and often standing in the dark for two hours during yet another power cut.

Said looks like a man in his fifties who’s had enough of being shunted around endless queues. He braced himself against the flimsy tarpaulin scaffolding and brought dinner to a standstill, shouting in slurred Farsi at the nervous volunteers and placatory translators. There was not much we could do, except try to serve food around this angry rock blocking the stream. Eventually he retreated to the side-lines to glare at everyone.

I found out he is one of the most challenging refugees for Chios volunteers to work with. Almost every resident in the camp is polite and embarrassingly grateful to visiting volunteers. It’s a culture shock to return to our busy, impersonal cities and experience the blank, downturned faces after the warmth and closeness of Souda Camp. But any group of 800 people will have a small share of people suffering from alcoholism.

One of our long-term volunteers, who’s borne the brunt of some of Said’s drunken rages says, “I’ve rarely seen him sober. The times when he’s kicked off… it’s usually four or five attempts to intimidate, hit, punch, kick volunteers… He cannot be reasoned with when he is drunk and his friends can’t calm him down either”. So not a poster child for, but still a part of life in the camp, trapped in the paper maze of the EU asylum process like everyone else. Many of us who live with the right bits of paper in our pockets, who don’t have to beg for food in the freezing dark every night, have turned to drink under far less provocation.

I see him standing in the dinner queue one night. He seems calm, so I take a chance and say hello. He is polite, smiling, clear-eyed. My request for an interview is mistaken for a request to see the papers for his next asylum interview with the authorities, but eventually a meeting is arranged.

A few days later we sit in the nearby Fish Restaurant, Souda’s Wild West saloon bar, where refugees, EASO officials, translators, NGO-types and the police eye each other from their respective tables. I ask Said about his family and he empties pieces of paper from his pockets and spreads them on the table. Europeans must seem obsessed with demanding paperwork. With a jolt I realise we are the same age, 41. He looks 15 years older: Sandblasted by the full gale of life, while I feel a little like I’ve been wrapped in cotton wool in my comfortable English existence. Said has a brother in Austria, one back in Afghanistan, living with his mother, a wife and five sons. Two are grown-up and living in Austria, the other three, aged seven, eight and thirteen, are with him and his wife, living in military-run Vial, Chios’ grim reception centre for those arriving in Europe to escape persecution.

He and his family seem to have spent their lives struggling to achieve normality, while first the Russians, then the Warlords, the Taliban and the Americans did their best to tear it apart. They moved to Iran several times to avoid the worst of the fighting, where Said ran a shop, and they managed to get their oldest children to safety in Austria.

It’s possible to be a prosperous farmer in Afghanistan, but not when people start shooting at you while you harvest. The lack of residency permits closed off Iran as a safe haven and the family were forced to flee to Turkey: a bitterly cold, seven day hike through the mountains, where he says they almost froze to death.
They were lucky and made it across the Chios Strait from Turkey on their first attempt. Said says none of his children showed any fear during the crossing, unlike others in the packed boat. Growing up in Afghanistan exhausts your capacity for anxiety. The Greek police welcomed them by putting them in a container on the shore before taking them inside the barbed wire of Vial for processing.
And nine months later they are still there, putting up with the despair, the endlessly postponed interview process, the sudden fights, the lack of hot water, the terrible sanitary conditions, and atrocious food. A lot of EU money is sent to Chios but most of it seems to ‘Ali Baba’ en route, in camp jargon.

The regular refugee bus to Souda Camp enables Said and others to access the better volunteer-made food there. But then there are the long waits and the constant battle with the wind while unfolding and refolding pocketfuls of tattered documents proving eligibility.

It’s hard to imagine this polite, weary farmer, with a slight smile, is the same one that rages and lashes out so violently at us all on other evenings. Afghans have a reputation for craziness among other nationalities in the camps. As the long-term volunteer says, “I feel sorry for the Afghan community. I feel they’ve lost hope, maybe a long time ago. They’ve been on the move for so long and it seems they feel they have nothing to lose”. Of course ethnic neighbours are not often fond of each other, and it only takes one or two alcoholic self-anaesthetists to found a prejudice.

Said’s son Mohammad has a badly repaired cleft palette and also shows similar moments of rage, on one occasion hurling rocks onto the pitch during one of our football matches, until he was carried off. Whatever therapeutic help the family needs they aren’t going to get it while trapped in the bleak no-land of the Refugee Archipelago.

All sober-Said wants is to be in a safe place where his young children can grow up in peace. Instead, his family is trapped in a system that falls criminally short of meeting their physical needs, let alone psychological ones.

Your ticket for the: We are counting down for the Holidays – Said from Afghanistan

We are counting down for the Holidays – Said from Afghanistan